The Doodle Bug Club of America was organized for the sharing and enjoyment of the little red scooter which has become a rich part of our city history. Many of our members had a doodle bug when they were just a young boy or girl and wanted to renew the memory of what it was like to fly down the streets at a break-neck speed of 20-25 miles per hour on a machine that some considered unsafe for travel anywhere. Harry Mertz, an engineer, who was responsible and credited for the invention of the Doodle Bug came to Beam Mfg. in the early 1940’s to work on the early automatic washer and his work carried over to the Doodle Bug. The patents on record call the little machine a Mertz Motor scooter. Many of us don’t even remember what we did with our original scooter, whether it went into the junk pile or maybe we sold it to another adventurous youngster. After attending a show many got the yearning to buy another machine either restored to it’s original, some stage of original, or maybe they just purchased a pile of parts and transformed it back into a running model. Many of our members are meticulous in restoring the little bug to what we like to call “trophy” status, not to be ridden, just admired, but most are very content to have a “rider”. Some of the production models were equipped with a headlight and generator but many were totally devoid of any equipment which was later required. This probably led to the very short production period of 1946-1948 as well as the rising cost of material. As the production started to wind down in 1948, the selling price of the “Little Red Bug” had risen to a whopping $169.95, up considerably from the starting price of $69.95. Remember that a typical teenager at that time was making 35-50 cents an hour if He was lucky enough to even have a job. I remember that in 1950, as a 14 year old I purchased a used model for only $65.00.

Many of the doodle bugs which are brought to the shows look like a little innocent red “Bug” until you take it for a spin and that is when you notice that it is powered with anything from a 3HP to a 7-9HP racing engine, and capable of shooting the machine down the road at speeds up to 50 mph. Quite a few are more original with either a stock 1 1/2 HP engine which has been restored or maybe updated with a 3-4 HP engine which does a very respectable job. If the drive train remains unchanged, the top speed will be in the 22-24 mph range, but in some cases a torque converter has been added and this provides a better speed and power combination. The original drive system was chain and v-belt coupled to either a 2 piece or fluid centrifugal clutch. The fluid clutch played a very important part in the development of the early automatic clothes washer, also produced by Beam Mfg. Company. It was soon found that the fluid clutch solved the problem of the clothes washer dancing all around the room during the spin cycle.

Some of our club members have brought to the show 3-wheeled variations of the doodle bug, one in particular which was built as a miniature wrecker complete with a winch capable of towing a pickup truck around the fairgrounds. Another was fitted with a front mounted toolbox which appeared to be capable of carrying just about everything except extra fuel for some of the club’s long trail rides on the Boone River trail which is a 11.4 mile round trip biking and walking path which Parks and Recreation graciously allows the club to ride each year during the show. This continues to be one of the most popular endurance runs in addition to the ride to the airport, approx. 7 miles round trip. During the show, many other rides around town are planned as well as the original test route used by the test riders during the production of these little gems in the 1940s.

In its almost 37years of existence, the Doodle Bug Club of America has grown to be a very active club and in 2011 attracted a record number of scooters from states including California, New York, and   formerly Alaska. The club presently boasts membership in  32 states. The annual reunions are held during the second weekend after Labor Day and continue to grow as time goes on. Now that you know all about us, wouldn’t you rather ride a Doodle Bug than a Harley? 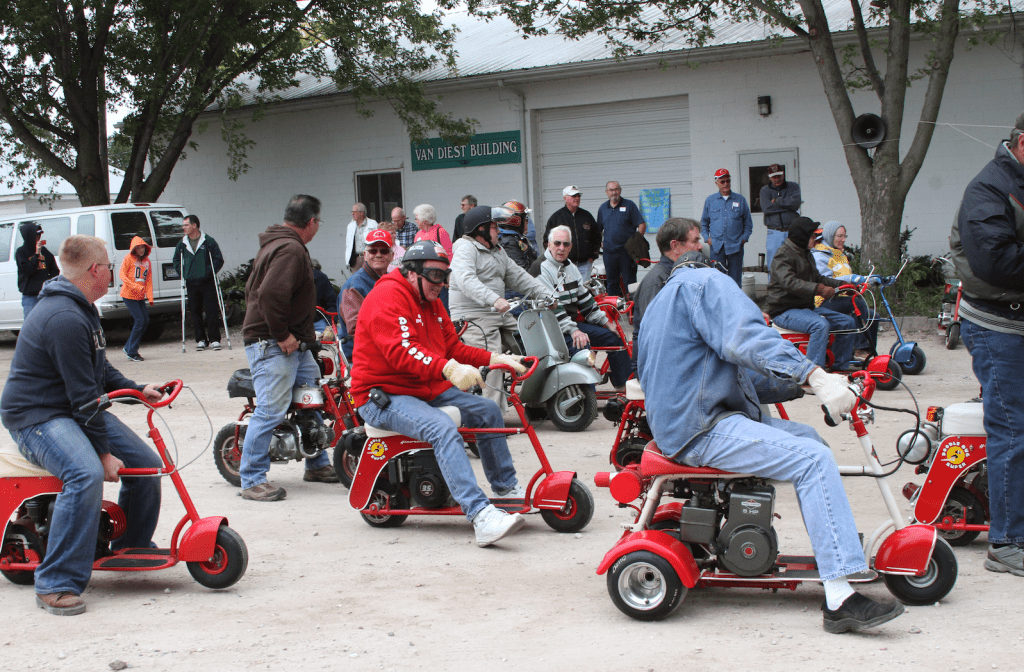